I don’t often do Mexican food (or my interpretation of Mexican food). for some reason, Surly Dwarf just doesn’t trust it. Occasionally though I rebel and push for something Mexican around here. Usually, it’s tacos but lately I’ve been wanting these enchiladas I used to make when I was a teenager. I wanted to change them up though, I figured doing them like a lasagna would not only be easy but fun too. I was right. Instead of a meat filled enchilada I decided to make a simple bean filled one, great for those meatless nights. Total success, it was so good even Surly Dwarf went for seconds on this one. It may not make for the best picture but it is full of delicious. 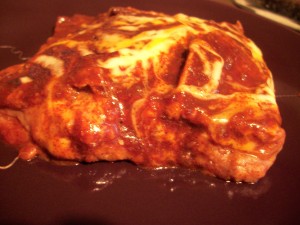 Makes four servings. Each serving contains 275 calories, 7.9 grams fat, 38.8 grams carbs, 7.3 grams fibre (I know!), and 15.1 grams protein. So filling, so nummy, and far less fat than a Mexican restaurant would wallop you with. Enjoy!