What better way to send off your riders of rohan before battle. Really it’s just a meat and potatoes meal with a bit of flair…I have to say though my husband definitely felt fed enough to go battle some sort of orcs after this…and did….even if they were just pixels it was still a noble deed. In LOTRO the feast of rohan is made from: golden shire taters, flank of beef, and a bunch of blackberries. Like the shire rations recipe before this took some creative deconstructing. Fruit with meat is nothing new really, so why not a nice sauce with the beef….and so I did. A red wine blackberry reduction definitely does the trick. 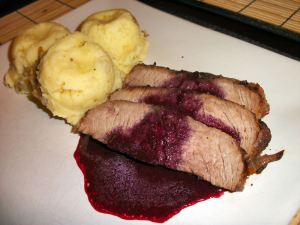 Serves two riders of rohan….or just one rider and his wife who won’t be told to stay home and will dress as a man and totally kick some butt. Each serving contains 403 calories, 14.9 grams of fat and 5.8 grams of fibre. Which really isn’t bad at all for a steak dinner. Excellent with cooked carrots as a side dish for those that need a little extra vitality before battle.

This entry was posted in Comfort Foods, Dinner, The Hardcore Hobbit and tagged Beef, Blackberry, Potato. Bookmark the permalink.